We keep pure Gotland, Poll Dorset, Devon & Cornwall Longwool and Jacob sheep, Pedigree Devon Ruby Red Cattle, and from spring to autumn Pigs. Our Ducks and Chickens have free run of the farm and our friendly Llama Jacob supposedly looks after them.

Our animals are traditionally reared in a non intensive way and are free to roam and graze on our pasture (as well as our own hay during winter) which ensures the best possible and least stressful environment for them. We aim to manage the farm in a way that benefits our animals but also supports and encourages the rich variety of flora and fauna on our land.

All animals are reared slowly and stay on grass (or our own hay/silage) until they reach their full weight. Welfare of animals is paramount. We grow quality produce in a responsible and eco friendly way.

Lambs – Reared as nature intended them to be - we normally lamb March to May. It is a magical time (and a bit tiring!)

Gotlands – From the Swedish Island of Gotland in the Baltic Sea, this breed were originally bred by Vikings.They range from silver to black and their skins are much sought after, appearing in Harry Potter and Game of Thrones apparently! Our Gotlands also like the limelight and are super friendly, bucket trained and follow us around like dogs. We love ‘em.

Poll Dorset – (and Dorset Horn) are the only sheep that can breed all year round so very popular with commercial farmers. Chances are you’ve already tasted a leg.

Jacobs – Believed to be oldest sheep breed in world – mentioned in Old Testament Book of Genesis. Hardy, long lived noted for the flavour of their lean meat and their sought after wool.

Devon & Cornwall Longwool – Placid, large, sturdy and with distinctive longwoolled fleece used widely in carpets. It is often said they produce more wool per sheep than any other British breed. There have been longwoolled sheep in the South West for centuries – there are few flocks outside of this area.

Anglo Nubians – These are a large breed with long pendulous ears and a Roman nose. They are highly intelligent and spend 24 hours a day plotting how to escape. These overly friendly animals supply fresh milk for us and our cheesemaking. Our friendly billy Arnold along with all of his girls can be highly vocal but are always a delight. They provide excellent lean meat and the milk of an Anglo Nubian cannot be beaten on flavour or quality. 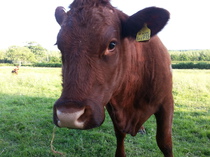 We have Devon Ruby Reds on the farm, a local breed that are encouraged by the Devon Wildlife Trust as they graze the rare Culm fields in a way that is beneficial to nature. Beef is the product of our very small suckler herd with the calves born on farm. They suckle from their Mums for at least 6 months – then grown til 30 months - all free range and grass fed/own hay in winter. The meat is hung for 21 days and is simply delicious. 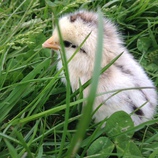 Whats to say? They quack, they cluck and they give us lots of eggs (usually!). They are free range and have the run of the farm. 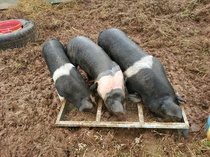 We usually keep pigs from Spring until Autumn, rear them outdoors and feed from our own veg patch, excess goats milk and pig nuts. They are always a fun addition to the farm and ultimately provide us with fantastic bacon, sausages, pork and ham.

Just Jacob. He is a loveable plum!

Nelly, Murray, Tom and Stumpy are our working dogs. Not quite sure what they are working at though! 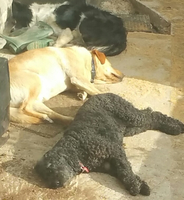 Get social with us.